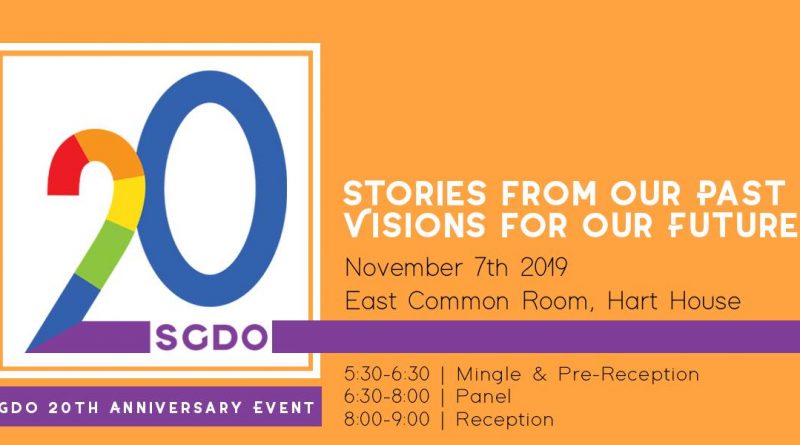 2019 marks the 20th anniversary of the Sexual & Gender Diversity Office (SGDO) and we will be commemorating our anniversary with a series of events throughout this academic year.

Join us in the East Common Room of Hart House on Thursday, November 7th as we kick-off our 20th anniversary event series with a panel discussion featuring stories from our past, reflections on LGBTQ+ cultural and representational shifts, and visions for change as we continue our work to build intersectional and anti-oppressive LGBTQ+ communities today, tomorrow and beyond. More details to come!

Bonte Minnema:
Bonte was a Trinity College student majoring in Women’s Studies Major in the late 90’s early 00’s. He was very involved with the Youthline, The Coalition for Lesbian and Gay Rights in Ontario (CLGRO), the Metropolitan Community Church of Toronto (MCCT), and on campus, with LGBTOUT, HomoHops, and many other campus initiatives from the Career Centre to Hart House. This included work on the Positive Space Campaign, and he was one of the students on the committee that helped advocate for the start of the Sexual Diversity Studies Program. Bonte has spent many years working in advertising for community media including Xtra!, Proud FM and NOW magazine. Currently, Bonte is freelancing on a number of marketing projects and events. Bonte is a founding donor of the Egale LGBTQ youth homeless shelter, which is currently under construction, and the Bonte Minnema LGBTQ Advocacy Award with the Sexual Diversity Studies Program.

Nadia Bello:
Nadia is an experienced adult educator and facilitator. She had a twenty-year non-profit career, mostly around anti-homophobia education and sexual and reproductive health for women, youth, queer and trans communities. Nadia is also a former elected official on the Toronto District School Board. She is a Certified Training and Development Professional (CTDP), a Certified Human Resources Professional (CHRP), and holds a Master of Science in Organization Development (MSOD). In addition to a small consulting practice, Nadia is currently the Manager of Operations and Experiential Learning for the Faculty of Community Services at Ryerson University. She is alumni of University Toronto (Victoria College by degree and University College by love, honourary affiliation, and time spent at Diablo’s), has been a UofT career mentor, and as a student helped found the Sexual Diversity Studies Student Union.

Oreoluwa Adara:
Oreoluwa is a 4th year student at UofT double majoring in equity studies and sexual diversity studies. They’ve been involved in various student groups on campus, particularly LGBTOut, Hardwire and Innis pride. Oreoluwa has been working at the Sexual gender diversity office as a program lead for the Queer and Trans Students of colour discussion group for three academic years now.

Refreshments will be served.

Presented by the Sexual & Gender Diversity Office, in partnership with Hart House and Alumni Relations.

There are accessible, single-user, all gender washrooms at this location and this space is accessible for attendees in wheelchairs and scooters.