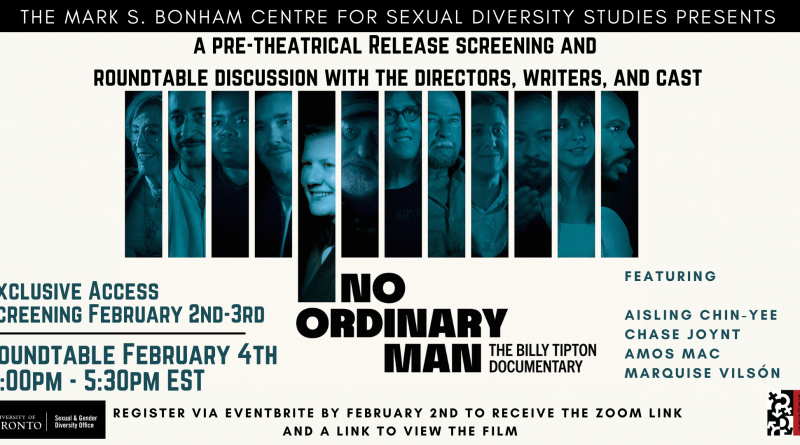 A recording of the event is now available on the Bonham Centre’s Youtube Channel.

The Mark S. Bonham Centre for Sexual Diversity Studies presents a limited-access screening of the ground-breaking film No Ordinary Man: The Billy Tipton Documentary in advance of its Canadian release on April 2nd!

After viewing the film, join us for a roundtable conversation and Q&A between the directors, writers, and cast, featuring Aisling Chin-Yee, Chase Joynt, Amos Mac, and Marquise Vilsón. The film will be available for viewing February 2nd-3rd through a password protected link that will only be accessible to viewers based in Canada. The roundtable will be held on Thursday, Feb 4 on Zoom, and a link will be sent on the day of the talk. All are welcome to attend the roundtable regardless of location! Live captions will be available for the talk.

About No Ordinary Man

Co-directed by Aisling Chin-Yee and Chase Joynt and written by Amos Mac and Aisling Chin-Yee, the feature-length documentary No Ordinary Man is an in-depth look at the life of musician and trans culture icon Billy Tipton. Billy Tipton came of age in the 1930s and 40s, playing saxophone and piano near his home in Kansas City and touring with his band across the American Midwest. Billy was one of hundreds of mid-level musicians who brought the swinging style of Duke Ellington to small town supper clubs. In the 1950s, Billy stopped touring and settled down in Spokane, Washington where he started a family. When he died in 1989, the story of Billy’s life was rewritten by tabloids and talk shows as a tale of trickery and deception – a legacy of contested meaning which endures to this day. Details of Tipton’s life have long been tied to Diane Middlebrook’s biography Suits Me, which claims Billy as an ambitious woman passing as a man in pursuit of a career in music. In No Ordinary Man, Tipton’s story is reimagined by trans writers and performed by trans people. The film juxtaposes details from Tipton’s life with the experiences of transmasculine actors as they audition for the role of Billy. Complicated, beautiful and historically unrivaled, this groundbreaking film shows what is possible when a community collaborates to honor the legacy of an unlikely hero.

You can find a trailer for the film here:

Aisling Chin-Yee is a Canadian film director, writer and producer. Her films include The Rest of Us, Synesthesia, and No Ordinary Man (which was awarded Best Canadian Feature at the Inside Out Film and Video Festival).

Chase Joynt is a writer, director, and Assistant Professor of Gender Studies at the University of Victoria whose films have won jury and audience awards internationally. His last short film, Framing Agnes, premiered at the Tribeca Film Festival and is being developed into a feature film with support from Telefilm Canada’s Talent to Watch program. Most recently, Chase directed an episode of Two Sentence Horror Stories for the CW that arrives on Netflix in February 2021.

Amos Mac is a writer, producer and visual artist currently writing on the new GOSSIP GIRL series for HBO Max. As a producer he’s worked across documentary and unscripted, including GAYCATION for Viceland. He is a founding editor of ORIGINAL PLUMBING, the print zine that artfully documented trans male culture from 2009-2019.

Marquise Vilsón is an actor and activist. He made his New York stage debut Off-Broadway as Berta in MCC Theatre’s CHARM and his feature film debut as Leon in Peter Hedges’ BEN IS BACK. As a young trans man, Marquise was featured in the documentary The Aggressives (2005), and is a long-standing member and participant of the underground ballroom scene in NYC. Upcoming projects include The Kitchen, starring Melissa McCarthy and Tiffany Haddish, NBC’s The Blacklist, and the Netflix’s Tales Of The City.

This event is sponsored by the Mark S. Bonham Centre for Sexual Diversity Studies and the Sexual and Gender Diversity Office (SGDO) at the University of Toronto.