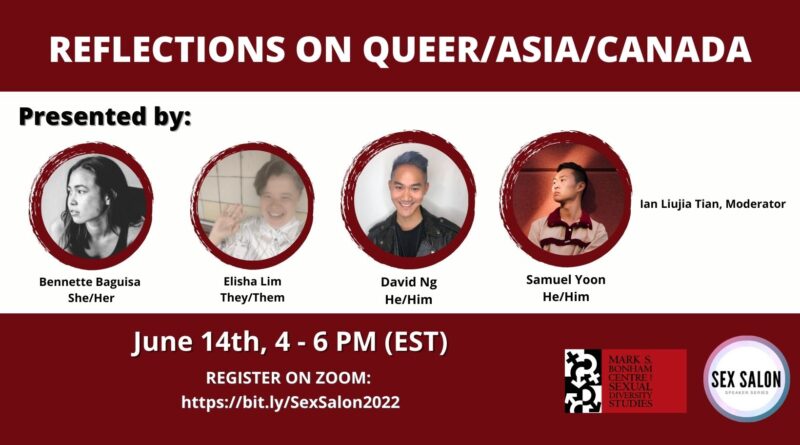 This panel brings together scholars working on several locations to rethink and cross the boundaries of areas and nation-states. Queering the boundaries between queer Asian diasporas in Canada and queer Asian studies, our panelists will explore the questions of belonging and identity for queer Asians under the condition of increasingly globalizing Asias on the one hand, and growing anti-Asian racism on the other. We will collectively imagine new ways of writing, thinking and theorizing queer Asia that cannot be easily mapped onto a particular area or nation-state. Instead, we will identify the travel of ideas, the fluidity of identification and the worldmaking of non-sovereign futures. Together, we will unpack the depth and scope of queer/Asia/Canada, and the work it can do to expand understandings of queerness in globaling Asias, and Asians in global queering.

This Sex Salon will be held virtually on Tuesday June 14th 2022, at 4PM Eastern Time. Register on Zoom to attend.

Ian Liujia Tian (He/Him), Moderator
Ian Liujia Tian is a doctoral student at the University of Toronto, with interests in queer approaches to social reproduction and labor migration in China and beyond. His current dissertation tracks how pleasure appears and mediates large socioeconomic transformation and everyday life in China’s rural countryside and migrant villages.

Elisha Lim (they / them)

Elisha Lim is an award-winning claymation filmmaker, and their queer and transgender films, comic strips, graphic novel (100 Crushes, Koyama Press) and arts-based activism in Montreal, Toronto, Berlin, and Singapore are documented by monographs on Duke University Press (Leslie Bow 2022) and Inanna Press (Tara Atluri 2018). Lim’s SSHRC-funded digital research analyzes social media platforms and the distortion of identity politics, and is published in the popular press (The Daily Beast; hyperallergic; Document Journal; TEDxUofT; ) academic journals (Social Media + Society 2020; 2021; GLQ forthcoming), and is the subject of their upcoming graphic novel, 8 Dreams About You. Lim holds a BA in Sociolinguistics, an MA in English Literature, a near completion PhD in Women and Gender Studies, and Media, Technology, and Culture from the University of Toronto. In 2017, they were awarded OCAD University’s medal for best Master of Fine Arts in Criticism and Curatorial Practice.

David Ng (He/Him)
​
​David is the Co-Artistic Director of Love Intersections. His work has also recently included collaborations with Primary Colours / Couleurs primaires, which is an initiative to decolonize the Canadian art system by putting Indigenous arts practices at the centre, through the leadership of Indigenous artists, supported by artists of colour. David has been a filmmaker for 22 years, and more recently through Love Intersections, he has produced over 15 short films, which have screened internationally at over 60 film festivals. His last film, Yellow Peril: Queer Destiny screened at the Academy Award Qualifying festivals: The Leeds International Film Festival, and the Aesthetica Film Festival. He is currently a PhD candidate at the Social Justice Institute at the University of British Columbia. He holds a Master of Social Sciences from the African Gender Institute at the University of Cape Town.

Bennette Dayno Baguisa is a Scarborough-born, Manila-raised and now Scarborough-based scholar. She holds a Master of Arts in Women and Gender Studies from the University of Toronto and Bachelor’s degrees in Political Science from Ateneo de Manila University and Gender, Feminist and Women’s Studies from York University. Her master’s research was an investigation into how Filipino-Canadian diasporic culture and aesthetic expression can illuminate radical forms of femininity.

Samuel Yoon is a second year PhD student in Women and Gender studies at the University of Toronto. His research looks at questions of violence and memorialization through Asian diasporic cultural productions with particular focus on queer Asian/American performance. Outside of the academy, he has worked in the HIV/AIDS sector and in his spare time is a dancer and performer in queer of colour spaces across Toronto.