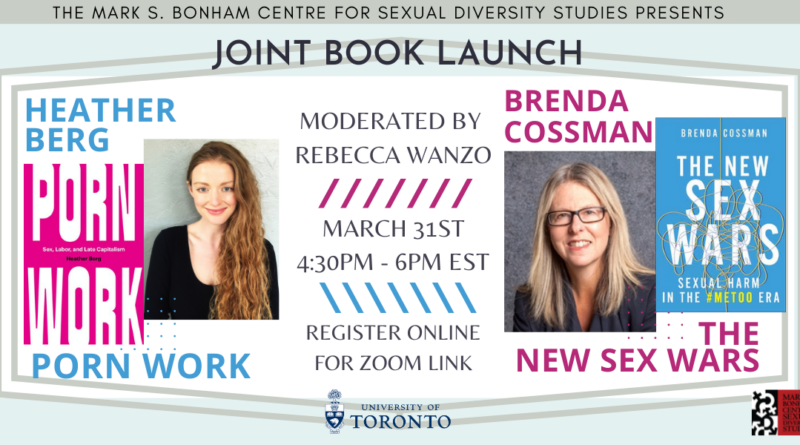 Join us for a joint book launch spotlighting the new work of Brenda Cossman and Heather Berg followed by a conversation moderated by Rebecca Wanzo.

Cossman’s The New Sex Wars: Sexual Harm in the #MeToo Era (New York University Press, 2021) revisits the sex wars of the 1970s and ’80s and examines their influence on how we think about sexual harm now. From the ’70s to today, Cossman examines tensions between the need for recognition and protection under the law, and the colossal and ongoing failure of that law to redress historic injustice. By circumventing law altogether, #MeToo has led us to question whether justice can be served outside of the courtroom. The New Sex Wars explores what can been learned from these debates, how we have been denied our anger, and where to begin to make law work.

Brenda Cossman is Professor of Law at the University of Toronto and was Director of the Bonham Centre from 2009-2018. Her publications include Sexual Citizens: The Legal and Cultural Regulation of Sex and Belonging (Stanford University Press, 2007), the co-authored Bad Attitudes on Trial: Pornography, Feminism, and the Butler Decision (University of Toronto Press, 1997) and Censorship and the Arts (Ontario Association of Art Galleries, 1995). Her teaching and scholarly interests include family law, law and gender, and law and sexuality. She has published widely in University of Toronto Law Journal, Harvard International Law Journal, Columbia Journal of Gender and Law, Canadian Journal of Family Law, American Journal of Gender, Social Policy and the Law and many others. Cossman is also a frequent commentator in the media on issues relating to law and sexuality, most frequently for The Globe and Mail.

Heather Berg is Assistant Professor of Women, Gender, and Sexuality Studies at Washington University, St. Louis. Her research and teaching interests include sexuality studies, Marxist feminist and queer thought, and resistance studies. Her research appears in Signs, Feminist Studies, Women’s Studies Quarterly, and Porn Studies, and has been featured in The New York Times, The Los Angeles Times, and El País. At Washington University, she teaches courses on Sexuality and the State, Sex and Money, Everyday Unruliness, and Feminist Theory. Her second project, “Sex Workers Against Work,” is an intellectual history of the sex worker left. It engages anti-capitalist sex workers’ critiques of straight work, unpaid sex, and state violence and explores their experiments with alternatives.