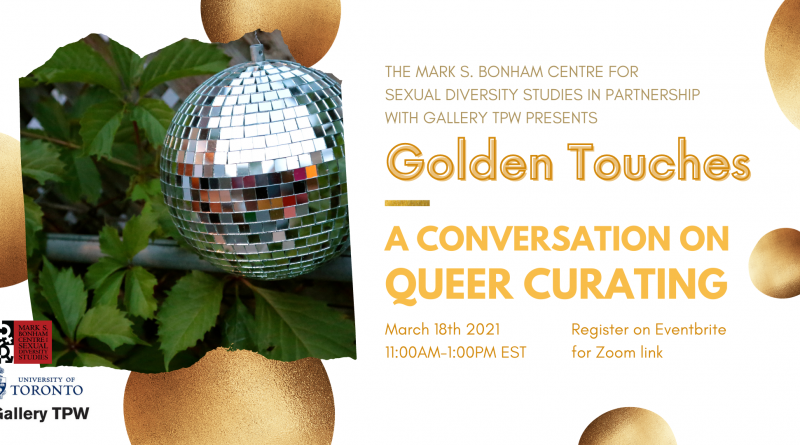 Hosted by our inaugural Artist-in-Residence, Michèle Pearson Clarke, this conversation is part of the process-based research she is undertaking into queer and feminist curatorial strategies during her year-long residency. Her work in this area will culminate in “We Buy Gold,” an upcoming exhibition of contemporary Canadian LGBTQ2S+ photography in partnership with Gallery TPW.

Please register on Eventbrite for access to the panel.

This event will be held as a Zoom webinar and will include live captioning. Please use the order form for this event or the “Contact the Organizer” function on Eventbrite if you have any other accessibility requirements.

About the Conversation
Framed by current discussions happening at the intersection of contemporary art, social transformation, activism and care, this online panel discussion will invite participants to reflect on the politics and practices of queer curating in Canada. Taking up queerness as both an orientation and a mode of possibility, panelists will address questions of queer exhibition making, curating otherwise and foregrounding difference as a queer strategy of subversion. The conversation will be moderated by Michèle, with guest speakers Blair Fornwald, Vanessa Kwan, Sean Lee, and Adrienne Huard and Lindsay Nixon.

Blair Fornwald (she/they) is an interdisciplinary artist and curator originally from Treaty 4 Territory, Saskatchewan. Currently living in Treaty 1 Territory, Fornwald is Director/Curator of the School of Art Gallery, University of Manitoba and has held previous curatorial positions at the Dunlop Art Gallery and RPL Film Theatre. Fornwald’s practices are united by a collaborative impulse and interests in the aesthetics of failure, the expression of vulnerability, and the use of humour to confront difficult truths. Fornwald has presented work across Canada, the United States, and in Germany. She holds a BFA (2002) from the University of Regina and an MFA (2007) from the University of Western Ontario.
Vanessa Kwan (she/ they) is an artist and curator with a focus on collaborative, site-specific and community-engaged practices. She is Program Director at grunt gallery on unceded Musqueam, Squamish and Tsleil-Waututh territories (Vancouver, Canada) and is also curator/ producer at Other Sights for Artists’ Projects, an organization that produces artworks for the public realm. She regularly writes and publishes on art and culture, and has recently spearheaded projects at venues across the Pacific Rim (Vancouver, Seoul and Sydney) exploring artist-led creative exchange.

Sean Lee (he/they) is an artist and curator exploring the notion of disability art and accessibility as the last avant-garde. Orienting towards a “crip horizon”, his practice gestures towards the transformative possibilities of a world that desires the way disability can disrupt. Sean holds a B.A. in Arts Management and Studio from the University of Toronto, Scarborough and is currently the Director of Programming at Tangled Art + Disability. He also is a member of the Ontario Art Council’s Deaf and Disability Advisory Group and Toronto Art Council’s Visual Arts / Media Arts Committee.

Adrienne Huard (she/her) is an Anishinaabe curator, art critic, scholar and performer, registered at Couchiching First Nation, Ontario, and born and raised in Miiskwaagamiwiziibiing/Winnipeg. After graduating in 2012 from the University of Manitoba with a Bachelor of Fine Arts majoring in photography, she pursued a Bachelor of Fine Arts in art history at Concordia University in Tio’tià:ke/Montreal. Huard graduated from Concordia in April 2018 and went on to complete OCAD University’s graduate-level program in criticism and curatorial practice in Tkaronto/Toronto. In September 2020, she began the PhD-level program in Indigenous studies at University of Manitoba. She now joins the team at national arts publication, Canadian Art magazine as an Editor-at-Large.

Lindsay Nixon (they/them) is a Toronto-based Cree-Métis-Saulteaux SSHRC doctoral scholarship recipient, a McGill University Art History Ph.D. candidate, and an assistant professor in Ryerson University’s Department of English. They previously held the position of Editor-at-Large for Canadian Art and served as the Arts and Literary Summit programmer for MagNet 2019. Nixon’s first book nîtisânak (Metonymy Press, 2018) won the prestigious 2019 Dayne Ogilive Prize and a 2019 Quebec Writer’s Federation first book prize, and has been nominated for a Lambda Literary Award and an Indigenous Voices Literary Award. Nixon is the co-founder of gijiit: a curatorial collective that focuses on community-engaged Indigenous art curations, gatherings, and research dealing with themes of gender, sex, and sexuality.