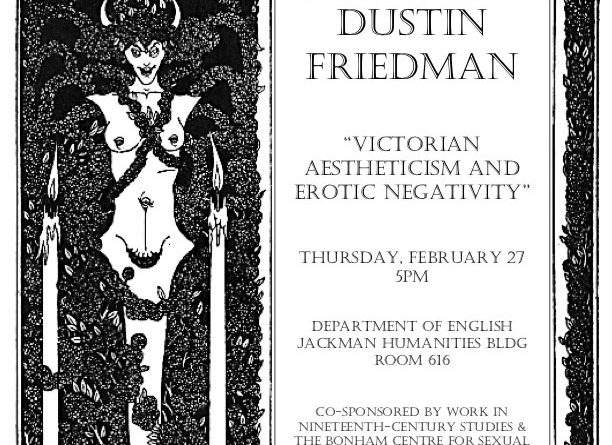 This talk addresses how Victorian aesthetes deployed their philosophy of “art for art’s sake” to establish a nascent sense of queer sexual identity and community. It focuses on Walter Pater’s essay “Winckelmann” (1864) to discuss a concept I call “erotic negativity,” where the traumatic realization of one’s queer desires transforms into a liberating sense of freedom from constricting norms. Ultimately, I argue that aesthetes adapted G.W.F. Hegel’s concept of “the negative” to articulate a claim rarely uttered in either Victorian or modern culture: namely, that being queer can be an advantage not despite but because of social hostility toward non-normative desires.

Dustin Friedman is Assistant Professor of Literature at American University. His areas of interest include queer theory, the history and theory of aesthetics, and global nineteenth-century writing. His book, Before Queer Theory: Victorian Aestheticism and the Self (Johns Hopkins University Press, 2019) explores art as a form of queer resistance in the writings of authors such as Walter Pater, Oscar Wilde, Vernon Lee (Violet Paget), and the Michael Field poets (Katharine Bradley and Edith Cooper).