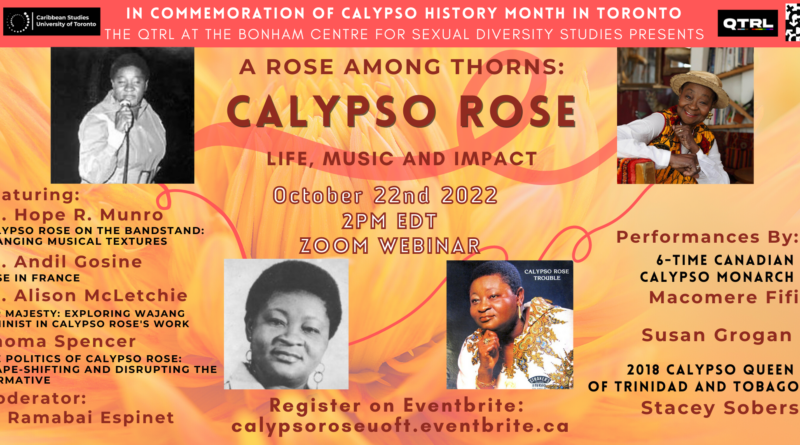 Calypso Rose is considered the Mother of Calypso and is universally acclaimed as the undisputed Calypso Queen of the World. In fact, her influence over the calypso music genre forced the renaming of the decades long “Calypso King” competition to the “Calypso Monarch” instead. Her Calypsos on social justice and issues of gender equality have initiated change in legislation and policy in both Trinidad and the US.

Convened by the 2022-23 Queer and Trans Research Lab Artist-in-Residence, Rhoma Spencer, A Rose Among Thorns: Calypso Rose – Life Music and Impact will explore the rise of Calypso Rose and her music through the years. This event will be held as a Zoom webinar featuring a moderated panel, Q&A, and featured performances at 2pm EDT on October 22nd.

To attend, you must register using the Eventbrite link.

Accessibility needs can be shared on the Eventbrite registration form or emailed to qtrl.sds@utoronto.ca.

Dr. Ramabai Espinet is Trinidadian by birth and now lives in Canada. She is a writer, critic and academic. She was for many years a Professor of English at Seneca College, a post from which she retired recently. She continues to lecture in the Caribbean Studies program at the University of Toronto. Ramabai Espinet’s works include a novel, The Swinging Bridge (2003), Nuclear Seasons, poetry (1991), Indian Robber Talk, performance poetry (1995). She is the editor of Creation Fire, an anthology of Caribbean women’s poetry in several languages, containing the work of 121 poets. She presented a paper on calypso titled “Ba-a-ad is mih style: Sex, lies and gender dynamics in Calypso” at the World Culture Forum in Brazil (2004). She has been a calypso judge in Toronto for several years. Her interest and enthusiasm for calypso is a lifelong passion.

Hope Munro is an associate professor of music at California State University, Chico where she teaches courses in world music and music history. She earned her PhD in ethnomusicology from the University of Texas at Austin. Her book What She Go Do: Women in Afro-Trinidadian Music, was released in 2016 as part of the Caribbean Studies Series of the University Press of Mississippi.

Dr. McLetchie is an Assistant Professor at South Carolina State University. Her research interest includes race; ethnicity; economic inequality; calypso; religion; Caribbean Carnivals; HBCU campus cultures; la Divina Pastora; and Caribbean Catholic music. Some of her recent publications include the co-edited book, Contributions of Historically Black Colleges and Universities in the 21st Century (2022); a co-authored paper, “Perceptions of COVID-19 in a sample of female clergy” (January, 2022) in, Christianity and COVID-19: Pathways for Faith; “Celebrating Caribbean-American Identity in the Southeastern US,” The Researcher: An Interdisciplinary Journal, Vol. 30 (1), Spring 2020 and “The Holy Temple of Soca: Rev. Rudder in Attendance” in Vanessa E. Valdes (Ed.) The Future is Now: A New Look at African Diaspora Studies (2012). Dr. Mc Letchie was the 2019 Saul O. Sidore lecturer, Plymouth State University in New Hampshire and the Cheryl Herrera Memorial Lecturer for the Conference on Theology in the Caribbean Today (2019 & 2016). With George “Buddy” Wingard, she completed the documentary, “We Came A Long Way By Faith: Catholic Hill and St. James the Greater Catholic Church” (2020).

Andil Gosine is Professor of Environmental Arts and Justice at York University in Toronto. Dr. Gosine’s publications include contributions to many journals (including Small Axe, Wasafiri, Sexualities, Topia, Caribbean Review of Gender Studies, Art in America) and scholarly anthologies. His artwork has been exhibited internationally at various galleries and museums and he most recently curated the exhibition “everything slackens in a wreck” at the Ford Foundation Gallery in New York. Dr. Gosine’s new book, Nature’s Wild: Love, Sex and Law in the Caribbean, was recently published by Duke University Press.

Rhoma Spencer is a Trinidadian Canadian queer actor, director, playwright, comedian and docu-filmmaker. A graduate of York University with an MFA in Directing, she formed the Theatre Archipelago in 2005 and, under her artistic direction, the company produced Mad Miss /Just Jazz in 2005, Fallen Angel and The Devil Concubine (2006), Twilight Café (2007), I Marcus Garvey (2009), and Obeah Opera (2012). She is the recipient of a U.S. House of Congress Proclamation and the Borough President of NYC Proclamation for her contribution to Caribbean theatre. In 2017, she founded the Canadian-Caribbean Arts Network. Most recently, Spencer wrote and directed the highly successful Physical Theatre Performance “Queerantine.” During the time of her residency as the Artist-in-Residence at the QTRL, Spencer will write a musical based on the life of queer Caribbean icon and the “undisputed Calypso Queen of the world,” Calypso Rose: McCarta Linda Monica Sandy-Lewis. Her residency will culminate in a staged reading of the musical with a cast of Canadian actors and a guest actor from Trinidad and Tobago to play the role of the young Calypso Rose.

This event is hosted by the Queer and Trans Research Lab at the Mark S. Bonham Centre for Sexual Diversity Studies with special thanks to Caribbean Studies and the Women and Gender Studies Institute at the University of Toronto for co-sponsoring this event.