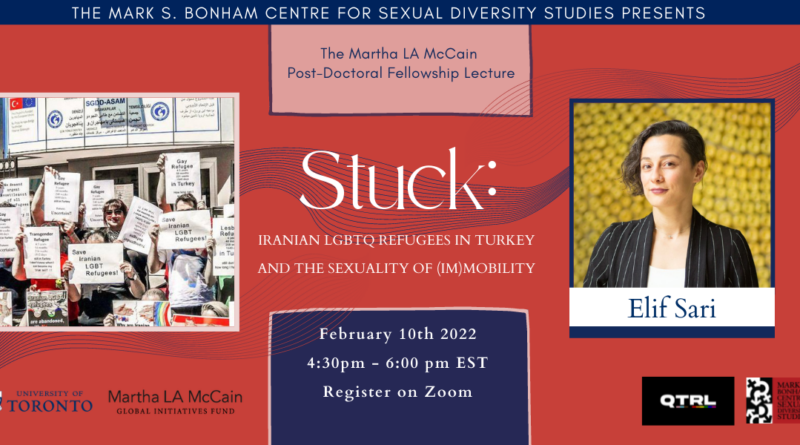 A recording of the event is now available on the Bonham Centre’s Youtube Channel.

Every year, the Martha LA McCain Postdoctoral Fellow at the Mark S. Bonham Centre for Sexual Diversity Studies delivers a public lecture that highlights their work. This event will be held on Zoom, and will include live captioning. A recording will be posted online after the event. Please contact sexual.diversity@utoronto.ca with any access requests.

Register here to attend the lecture on February 10th, at 4:30pm EST.

Stuck: Iranian LGBTQ Refugees in Turkey and the Sexuality of (Im)Mobility

This talk explores the carceral politics of asylum shaped by uncertain waiting, spatial confinement, and precarious material conditions together with refugees’ lived experiences and everyday negotiations to cope with violence, precarity, and uncertainty. Drawing on ethnographic research in Turkey with Iranian LGBTQ refugees awaiting resettlement to the United States and Canada, I develop an understanding of migration that foregrounds experiences of waiting, stuckness, and immobility, rather than movement, in the contemporary context of closed borders. As North American countries have cut their refugee quotas and tightened their asylum policies since 2015, the prospects for Iranian LGBTQ refugee resettlement have grown increasingly dim. Even applicants who have completed necessary asylum procedures and are formally eligible for resettlement remain stranded in Turkey with insecure status for an undetermined period of time. Moving between asylum interviews, NGO offices, informal workplaces, and refugee protests and parties, this talk explores how North American countries’ tightening resettlement policies, combined with Turkey’s strict control of refugees’ gender/sexuality, mobility, and labor, subject LGBTQ refugees to multiple forms of violence. It also examines how LGBTQ refugees respond to structures of stuckness and uncertainty by cultivating a queer ethics of love, care, support, and solidarity. They develop and uphold novel practices of self-making, kin-making, and community-making despite the ways in which the transnational asylum system pits them against one another in competition for access to scarce resources.