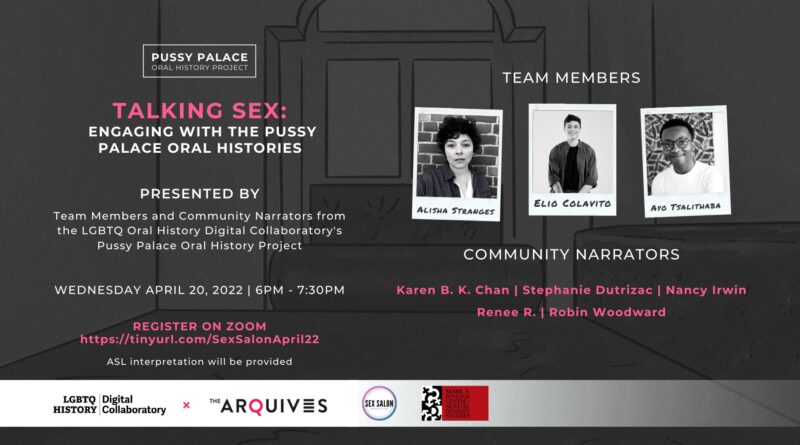 On September 15, 2000, five Toronto police raided the Pussy Palace, an exclusive bathhouse event for queer women and trans folk, laying several charges against the organizers, accusing them of violating liquor laws. There has never been an oral history project about this event, the last police raid of a queer bathhouse in Canadian history. The LGBTQ Oral History Digital Collaboratory, in collaboration with The ArQuives: Canada’s LGBTQ2+ Archives, has collected 36 interviews with bathhouse patrons, event organizers, and community activists. Our interviews address not only the raid, but also radical sex/gender cultures in turn of the 21st century Toronto. Our 6-member team has been working to animate and activate these interviews through research creation in the form of audio portraits, video shorts, and other methods.

This presentation will feature both community narrators and members of the project team. We envision this event as a curated ‘viewing and listening party’ designed to engage both the narrators themselves and others interested in queer and trans public history. The presentation will have these parts: a brief overview of the project; a showcase of several of our digital research creation experiments; a discussion of our creative processes; reflections from our featured narrators; and an open conversation with attendees about creative ways that researchers are collaborating with artists, project narrators, and others around engaging broader publics in queer and trans history.

Register on Zoom to join the event. ASL interpretation provided.

Alisha Stranges (she/her) is a queer, community-based, public humanities scholar, theatre creator, and performer. She currently serves as the LGBTQ Oral History Digital Collaboratory’s Research Manager. Since January 2021, she has supervised a 6-member team as the Project Manager and Co-Oral Historian for the Pussy Palace Oral History Project.

Elio Colavito (they/them) is a PhD student in the Department of History at the University of Toronto, specializing in Sexual Diversity Studies. As a trans non-binary researcher, Elio’s passion lies in archiving and re-telling queer histories in Canada. They currently serve as the Co-Oral Historian for the LGBTQ Oral History Digital Collaboratory’s Pussy Palace Oral History Project.

Ayo Tsalithaba (they/them) is a visual artist, originally from Ghana and Lesotho. Their primary mediums include film, photography, and illustration. Their work explores questions of home, visibility, and (un)belonging as they relate to Black queer and trans* African diasporic subjectivity. They currently serve as the Creative Director for the LGBTQ Oral History Digital Collaboratory’s Pussy Palace Oral History Project.

Karen B. K. Chan (she/they) is a speaker, trainer, and consultant on sex education, emotional intelligence, and equity, diversity, and inclusion. In the early 2000s, she was an organizer and committee member for the Pussy Palace bathhouse events.

Stephanie Dutrizac (she/her) is a poly queer who moved to Toronto from Montreal in the late 90’s. She’s been an enthusiastic explorer of queer sex positive spaces and community ever since. She was a repeat patron of the Palace events and was present on September 14, 2000, the night the bathhouse was raided by Toronto police.

Nancy Irwin (she/her) is a rebel femme who occasionally fights for justice. A biker, SM activist, world traveler, handy-dyke, play party organizer. Nancy has published incriminating articles in the queer, kinky and straight biker press. A switch who plays well with all genders, she makes a living with shovels, loaders and dump trucks.

Renee R. (she/her) was a member of the Palace’s security volunteer team on September 14, 2000, the night the bathhouse was raided by Toronto police. She later was called as a witness to testify in defense of the two volunteer-organizers charged with allegedly violating the liquor license act.

Robin Woodward (she/her) is a longtime maker and small business owner based in Toronto. Her favourite projects combine elements of hands-on crafting, graphic design and wordplay. She considers herself incredibly lucky to share her creative and home lives with her wife Ange Beever, as well as experiences of youth in an analog era.